We were flattered to find that Jo Piazza (Yahoo Travel) wanted to visit us here at Bison Quest, even though it’s winter, it’s cold, and it’s snowy.  But she and Jackie Laulainen (travel blogger) came for a visit anyway – and we had a blast.  Of course, the buffs are all photogenic and were happy to pose for the gals to take as many pics as they wished.  Watching (and photographing) Jo and Jackie taking selfies was priceless.  See you gals in June! 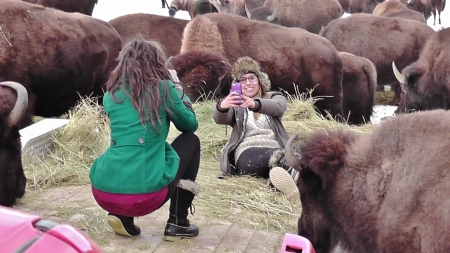 Jo and Jackie and bison – what a combination! 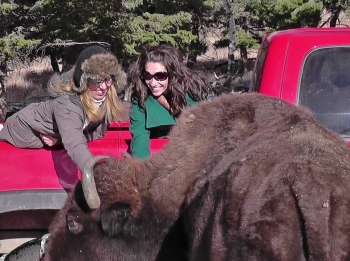 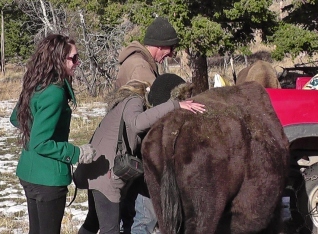 I just finished watching our bison clip on 20/20 . While the part about us was harmless, John Stossel’s statements on farming endangered species was poorly researched and an example of sensational journalism rather than investigative. I wasn’t surprised by Stossel’s piece on endangered species, but I still had held out a little hope that he would be more interested in facts and less interested in being a shock jock.   He wasn’t.  We certainly gave him all of the info (see our blog on farming endangered species), but he made no attempt to address any of the real issues.  And the comment, “farming saved the bison” is hogwash.  We outlined the history of the bison in our interviews and made it clear that that statement was historically false but he chose to ignore fact and stick to fiction.  Still, we do learn something new everytime we get the tv media here.  We’ve had a diverse variety of film crews now and we have sure learned a lot about them.  And Woolly Bully has become such a star, that he has demanded a raise in his treat rations from the next film crew!