A few years ago, Craig made a squirrel house and put it on the Doug Fir tree next to the house.  While a squirrel used it one winter, it never did house squirrel babies.  Then, the other day as we wandered out in the early morning to get in the truck to go feed the buffs, Craig said, “Well, look at that!”  And peeking out of the “squirrel” box was a wee owl face watching us with the utmost concentration.  We had heard them calling (a very monotonous beep  beep   beep  beep  beep   beep  beep  beep   beep that they can keep up for hours!!!) and, while we’ve never seen two at the same time, we’re quite certain that there are two and that they are nesting.  I took this photo the other day as the little owl sat in the entrance and watched the chickens with interest but no real intent (the chickens are about 10 times larger than this little robin sized owl who mostly eats mice).  To help out a little, we’ve been scattering some bird seed on the ground around the tree.  Now that’s what I call a Montana mouse trap! 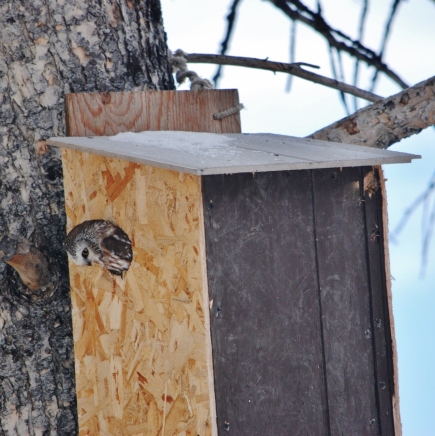 Watching the chickens wandering below.