Of course, the easiest time to add to our blog is when life is slow and mellow, and there’s some spare time. But then there’s not so much to say! It’s when life is exciting, challenging, and full that I can think of all kinds of things to write about, but can’t find a minute to sit down to do it. And that’s what winter has been like for us ever since Christmas day. We had a great Christmas here at the ranch and were able to “ferry up” kids and grandparents via four wheel drive to spend a beautiful and peaceful Christmas day. But we had no sooner gotten everyone back to their cars (which had been left seven miles away down by the highway) on Christmas evening when it began to snow. And did it snow! We had 7 inches of the fluffy white stuff. And then – it began to blow. And that spells trouble big time for our 7 miles of back roads leading to the ranch.

Now there are a few things to understand here. It’s not unusual for people in the northern states of the US to get snow. In fact, many of you get much more snow than we do – like in Maine or upstate NY or Minnesota. The difference is, those folks have services that plow the roads on a regular basis. When you live clear out here, in a poor county in Montana – well, they clear the road when they can and if they can (are drifts are big). And they give priority to roads with more people along them, as they should. So, it’s not the amount of snow you get that’s the problem – it’s the drifting snow and whether or not you have someone clearing the road for you.

Another thing you learn living in remote areas like this, is that you don’t “schedule” things. You work around the weather and the roads. You don’t say, “I want to go to town today.” You say, “The road is open, I think I’ll go to town today.” or “ The road has drifted shut, I think I’ll work up in the office today.” Life is much easier that way, and it keeps the stress level down. But we do live in the modern world – at least some of the time – and that world just doesn’t have that laid back attitude. “Modern Life” centers around schedules and plans and set times. And when those plans collide with the weather in remote country – well, it makes life very interesting indeed.

Jeff Diamond, a producer from ABC’s 20/20, had scheduled to come up here to film the herd and talk to us about our views on whether farming wildlife domestically could save them in the wild (see my earlier blog entry – that’s what initiated that entry). They had it all planned for a specific day – of course – since the camera crew had to come in from Minnesota and Jeff from New York City. It all seemed reasonable at the time. Until it started to snow. And then to blow. The day they were scheduled to arrive. A flurry of phone calls between Jeff and I established that they did want to come, weren’t afraid of snow, and didn’t mind what their mode of transportation was. And I must say, they were as good as their word.

That morning we met the crew at the highway where we had parked a truck prior to the snow and wind.  We managed to drive 5 miles before encountering an impassable drift.  We then switched to snowmobiles (and neighbors with snowmobiles – we have awesome neighbors), to ferry the crew and equipment for 1 mile over a series of large drifts to another truck to complete the journey.   Jeff’s comment was, “You really ARE out in the wilds”. It was actually a lot of fun, and I don’t think that any of the crew will forget their arrival at Wild Echo Bison Ranch. Leave it to us to stand out in the crowd. It snowed hard all day (just ironic that it was clear with a bright blue sky both before and after their visit). What is it with film crews that they have to come in the snowstorms!? The crew from the Sundance channel “Big Ideas from a Small Planet” did the same thing!

At any rate, we thoroughly enjoyed our time with Jeff and his “crew”. Mark, the cameraman (and wildlife cinema photographer) and his “soundlady” Heidi, were really great and, being from Minnesota, the snow didn’t even slow them down. Everyone was dressed to the “nines” (in this case, that means lots of layers of wool and down and pacs for footwear) and we all managed to stay warm even though the snow fell all day.  They filmed the herd all morning, and the buffs – well, suffice it to say that they are always happy to see us with guests Not because they have latent dreams of being film stars, but because we break out the bags of sweet grain and they just LOVE that! And as for the filming itself – well, buffs always look good in white.

After a lunch of buffalo stew, they spent the afternoon setting up and filming the “interviews” with Craig and me. Definitely my least favorite part of the day. I am quickly coming to the conclusion that I really am not fond of formal interviews. It’s too hard to relax and “just chat” when a camera is turned on one. Not to mention that one has 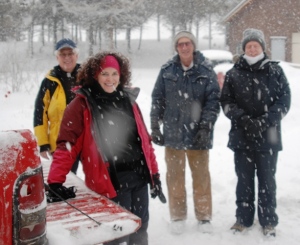 Craig and 20/20 crew all bundled for snow

no idea how it looks – or exactly how it will be used. But we got through it and, if nothing else, were able to give our view as wildlife biologists on why farming endangered species is a bad idea. While I would much prefer giving my views via the written word, there’s no question that info via television reaches a wider – and different – audience. It will be interesting to see what the storyline looks like when it all airs.